On 9 July 2019, His Royal Highness The Prince of Wales joined members of the 1st Battalion The Royal Gurkha Rifles (1RGR) to celebrate the 25th anniversary birthday of this relatively new Gurkha Regiment. A key part of the day was the launch of the new Regiment's commemorative history, which has a foreword written by Prince Charles and which was authored by Craig Lawrence (shown in the picture with His Royal Highness). You can find out more about the book below (or simply click on one of the images to see the new Gurkha book on Amazon).

A selection of photographs from an informal parade which took place at Buckingham Palace on 14 March 2017 to celebrate Prince Charles' 40 years as Colonel in Chief of the Gurkha Infantry. Prince Harry assisted his father in awarding operational service medals to soldiers from The Royal Gurkha Rifles who had recently returned from a deployment to Afghanistan. Prince Charles also unveiled a painting by Yolanda Aucott which was commissioned by the Regiment to celebrate 200 years of Gurkha service to the British Crown. The painting depicts a contingent of Gurkhas from The Royal Gurkha Rifles marching down the Mall to take part in a service at the Gurkha Statue outside the Ministry of Defence. You can see a short film of this Gurkha spectacle at the bottom of the page.

THE BRIGADE OF GURKHAS TODAY

AN ILLUSTRATED OVERVIEW OF TODAY'S BRIGADE OF GURKHAS 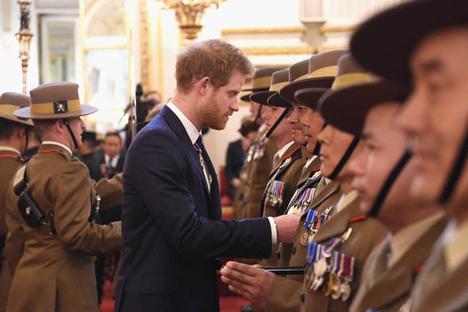 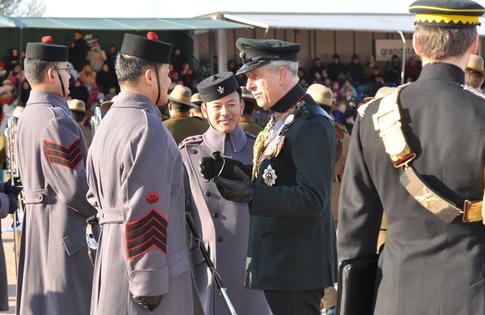 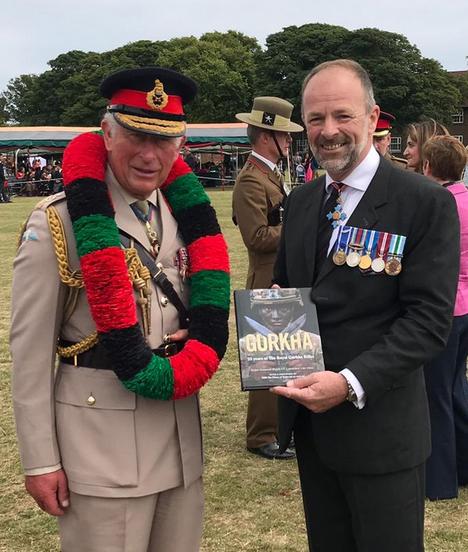 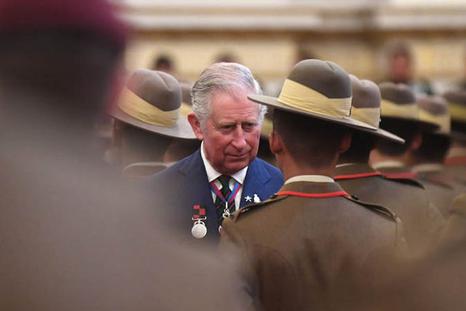 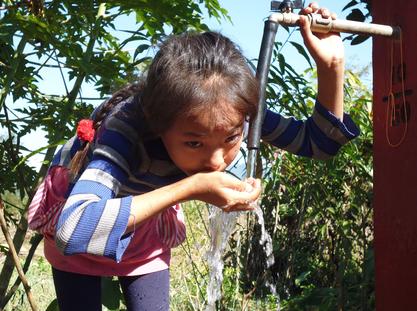 FIND OUT MORE ABOUT THE GURKHAS 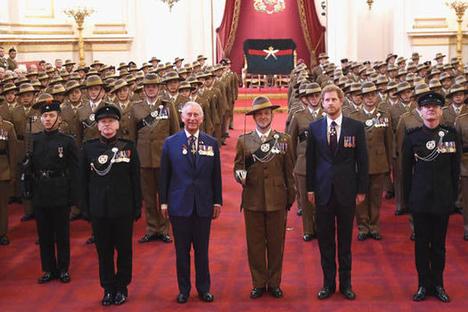 ​The Royal Gurkha Rifles (RGR) was formed on 1 July 1994 when the existing Gurkha regiments amalgamated to form a single regiment of three battalions. Although the RGR has only existed for 25 years, it carries the traditions and history of its antecedent regiments and has already established itself as a formidable fighting force in its own right. This book celebrates the new Regiment's first quarter century of life by providing a visual history of its many achievements over the last 25 years. With a Foreword by His Royal Highness The Prince of Wales, it includes more than 500 photographs of Gurkhas that have not been published before and it should therefore be of real interest to anyone who wants to know more about this elite fighting force. Half of the author's royalties from the sale of this book go to The Royal Gurkha Rifles Trust, the Regiment's charity, which helps improve conditions for serving and retired members of the Regiment and their families. In writing the book's foreword, the Prince of Wales noted:

When her brother is killed in a diving accident, journalist Amélie Lagarde asks ex-Gurkha Harry Parker to help her investigate. Together they get drawn into a desperate battle between an ambitious Prime Minister, the intelligence services and the world’s most wanted terrorist, leaving them with no choice but to take matters into their own hands.

'A good old-fashioned thriller, this title is fast paced and action-packed from the start... a good, easy-to-read book which is well worth getting hold of.’ Soldier Magazine (the magazine of the British Army), July 2020

'A fantastic read. If you like politico thrillers, with action, sex, travel and a Bond-like hero, then look no further.' Amazon review dated 15 April 2020

​This short and selective history of the Gurkhas is by no means exhaustive but it serves to illustrate the significant contribution that Gurkhas have made in Britain’s military campaigns over the last two hundred years. For more than two centuries, Gurkhas have been at the very heart of the UK’s military endeavours and they remain a much valued and highly effective part of today’s Army. Competition to join Britain’s Gurkhas remains extremely tough. In 2018, for example, there were 9,568 applicants for 270 places, an increase over the previous year. Although primarily employed in formed Gurkha units, officers and soldiers from the Gurkhas also serve in specialist units such as the Special Air Service (SAS). This page provides a brief overview of recruiting - for more information see the Special Interest Section in the new Gurkha book, 'Gurkha: 25 years of The Royal Gurkha Rifles'. 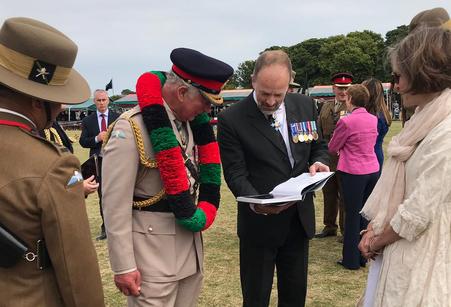 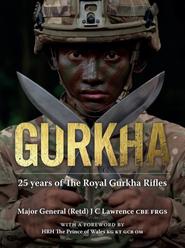 A potential Gurkha recruit taking part in the stamina assessment conducted during Central Selection in Pokhara, West Nepal.  During the assessment, which is conducted as a race, potential Gurkha recruits have to carry a weight of 15kg in a ‘doko’, the rattan basket that the people of Nepal traditionally use to carry heavy loads along the mountain paths of the Himalayas. The route for the stamina assessment is 5.8km long and includes a climb of over 580 metres - it is not easy by any stretch of the imagination!

PRINCE CHARLES AS THE GURKHA COLONEL-in-CHIEF

On 14 March 2017, a detachment from The Royal Gurkha Rifles took part in a ceremony at Buckingham Palace to celebrate Prince Charles' 40 years as the Colonel-in-Chief of the Gurkha Infantry. Prince Harry, who has served alongside Gurkhas on operations, joined his father at the celebration, helping to award operational service medals to some 150 members of the Second Battalion of The Royal Gurkha Rifles following their return from a deployment to Afghanistan on Operation Toral. Commenting on their tour in Afghanistan, Prince Charles said that: "I know that your eight-month tour in Kabul was arduous and dangerous but that you performed to the very highest standards of professionalism in true Gurkha spirit.” Before presenting the medals, he went on to observe that: "Your forefathers would be most proud of you here today, continuing to demonstrate the traditions and achievements that together ensure the worldwide reputation of the Gurkhas as the best soldiers.”
​ 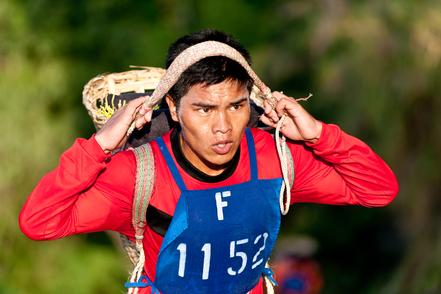 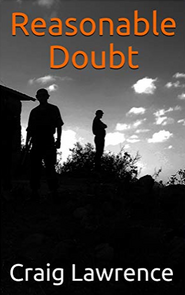 During 'central selection' in Pokhara, potential Gurkha recruits have to be able to complete at least 8 over-arm heaves/pull ups.  This is not at all easy and the majority of young men will have practised this for a number of months prior to attending recruit selection (note that this image was taken when the requirement was 12 under-arm heaves!)

A girl drinking from a tap stand in Bharat Pokhari, a village near Pokhara, following a Gurkha Welfare Trust project in 2013.

When they leave Britain’s service, retired Gurkhas and their families are supported in times of need by the Gurkha Welfare Trust. Based in Salisbury, the Trust ensures that those Gurkhas who have given so much during their service are able to live their lives with dignity. It pays welfare pensions, builds schools in remote mountain villages, runs care homes, provides safe drinking water, installs sanitation facilities and provides primary medical care to the most needy. Follow this link to find out more about the work of the Gurkha Welfare Trust.

Members of the Band of The Brigade of Gurkhas in conversation with the Colonel-in-Chief of The Royal Gurkha Rifles, His Royal Highness The Prince of Wales, during a medal parade for 1RGR in 2011. His Royal Highness is also Patron of the Gurkha Welfare Trust. 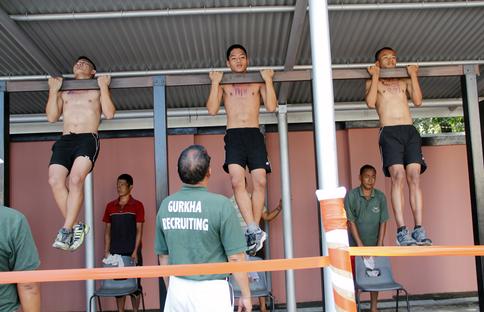 Enter text
See the Kindle version on Amazon for £2.99