A painting of the storming of Delhi in 1857 showing ‘the incident at Subjee Mundi’. A soldier from the Sirmoor Battalion (later the 2nd Gurkhas) is about to draw his kukri and decapitate a mutineer.

And you can find out more about the remarkable work of the Gurkha Welfare Trust at the following link: 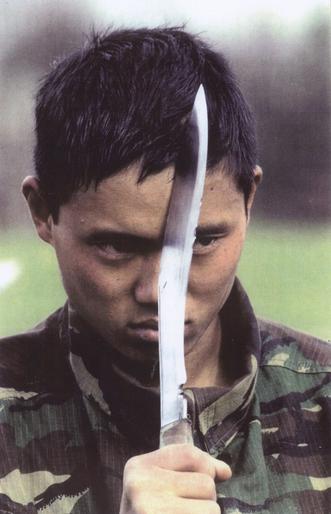 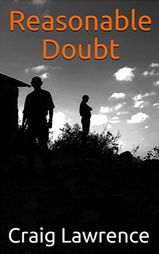 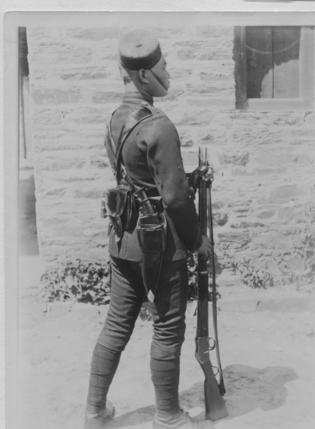 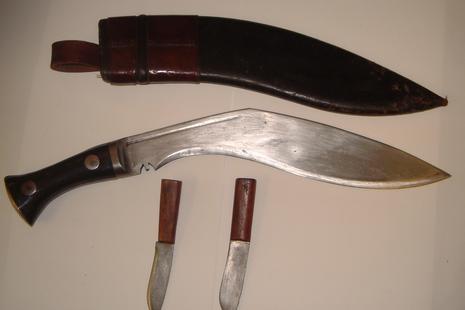 A soldier from 3rd Gurkhas carrying a ceremonial kukri (or khukuri) and about to decapitate a water buffalo in 1945 or 1946 as a sacrifice during the Hindu festival of Dashain.  Severing the head with a single blow of the Gurkha knife will bring the Battalion good luck in the year ahead - anything less will bring bad luck.

kukri (or khukuri) - the GURKHA knife

GURKHA KUKRI (OR KHUKURI) - THE STORY OF THE FAMOUS GURKHA WEAPON

If you want to find out more about the history of Britain's Gurkhas, the following link will take you to the Gurkha Museum's web page: 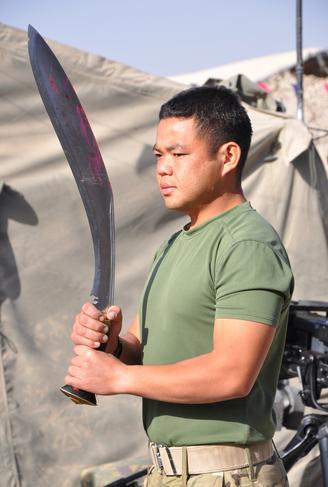 Link to news about The Second Battalion, The Royal Gurkha Rifles 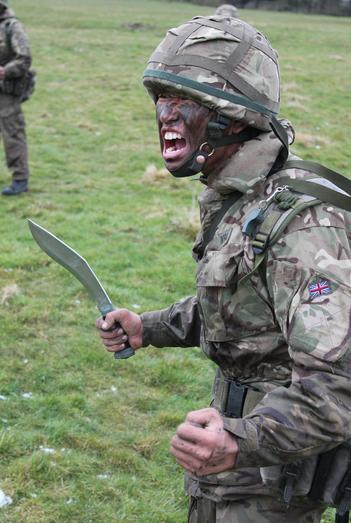 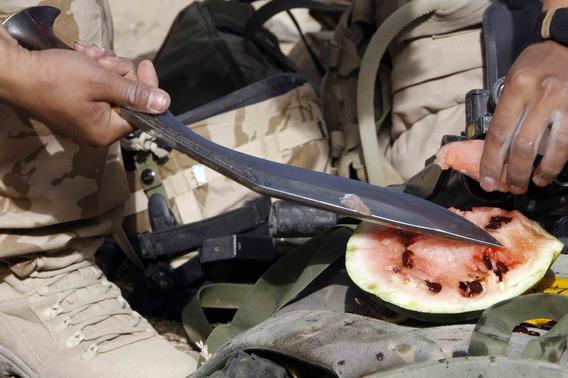 Tweet
Link to find out more about General Bill Slim, the legendary Gurkha general who commanded in Burma during WW2 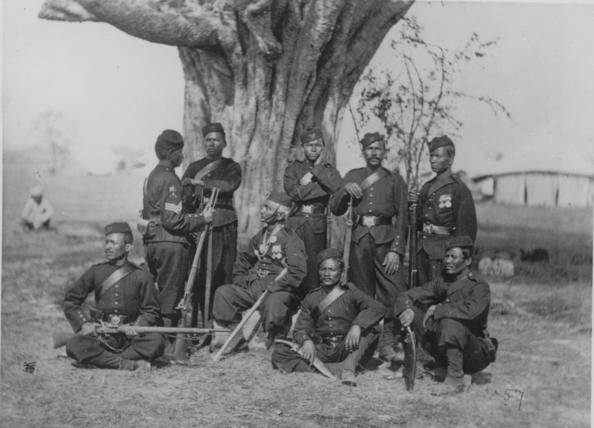 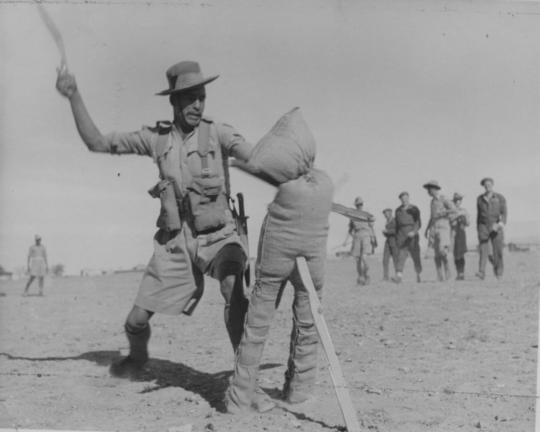 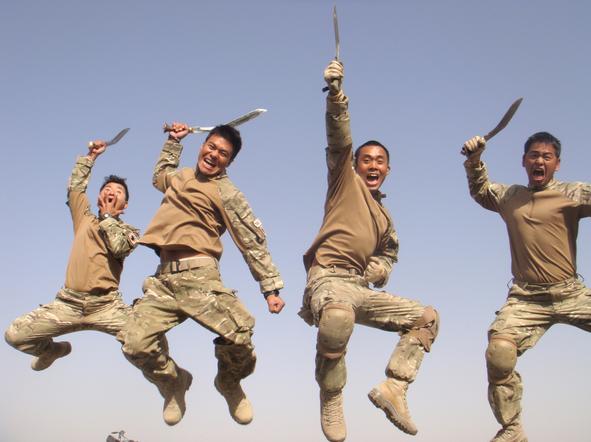 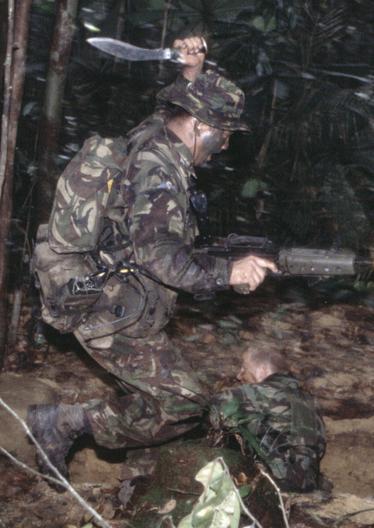 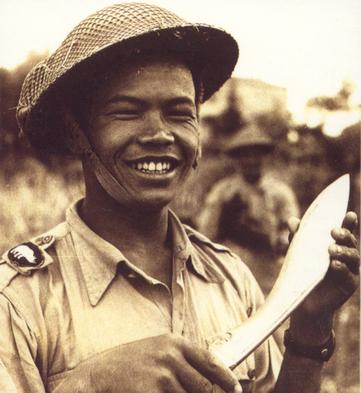 Link to quotes about Gurkhas

Soldiers from The Royal Gurkha Rifles practising their kukri (or khukuri) drills in Bosnia in 2005.  Its size and shape make the Gurkha knife an ideal weapon for close quarter fighting.

A Gurkha soldier and his kukri (or khukuri). In 1948, the Prime Minister and Supreme Commander of Nepal, Maharaja Padma Shamsher Jangabahadur Rana, wrote that the kukri (or khukuri) ‘is the national as well as the religious weapon of the Gurkhas. It is incumbent on a Gurkha to carry it while awake and to place it under the pillow when retiring.’ To the serving soldier, this famous Gurkha knife remains as important today as it was then!

The kukri (or khukuri) is ubiquitous in Britain’s Brigade of Gurkhas. The Gurkha knife has a prominent position on the capbadges of all Britain’s Gurkha units and it is carried by soldiers of the Brigade both on ceremonial duties and in the field. But the Gurkha kukri (or khukuri) is not just an historic symbol. Although the basic design of the kukri (or khukuri) has changed little over the centuries, the knife remains a potent weapon in the hands of a Gurkha, delivering lethal effect even on today’s contemporary battlefield. The Gurkha kukri's (or khukuri's) continued utility is well illustrated in this extract from the citation for the Military Cross awarded to Lance Corporal Tuljung Gurung for his actions in Afghanistan on 22 March 2013:

‘Showing exceptional instinct and courage he picked up the grenade and threw it out of the sangar. The grenade detonated, peppering the sangar with fragmentation. Gurung was again knocked off his feet. Through the obscuration of the debris he quickly identified an insurgent climbing into the sangar. Due to the close quarters, and unable to bring his rifle to bear, Gurung instinctively drew his kukri and slashed at the insurgent. In the ensuing hand to hand combat Gurung and the insurgent fell three meters from the sangar, landing on the ground outside of the Patrol Base. Exposed to possible further insurgent firing positions, he aggressively and tenaciously continued to fight with his kukri. The two insurgents, defeated, turned and fled.’

Gurkhas from The Royal Gurkha Rifles in Afghanistan with their kukris (or khukuris). 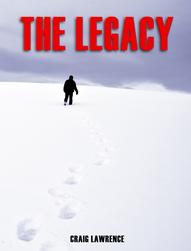 Want to know more about Gurkhas but don't want to buy the books? Then click to read the short illustrated history of Britain's Gurkha soldiers 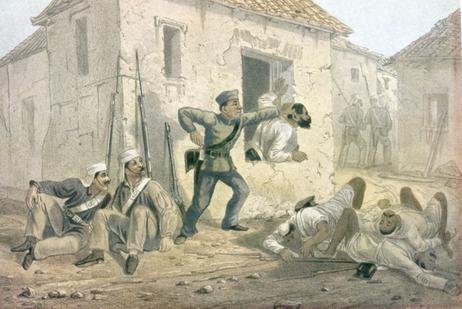 BRILLIANT BOOKS ABOUT GURKHAS - AND KUKRIS (or khukuris) ARE MENTIONED IN BOTH!

A modern military Gurkha knife (known as a kukri (or khukuri)) is usually about 30cm in length.  The kukri scabbard contains two pockets at the back to hold a pair of small knives. One of these, the chakmak, is for sharpening the kukri (or khukuri) and can be used with a flint to create a spark. The other, the karda, is used as a penknife for skinning animals.

As well as being a fearsome and effective weapon, Gurkhas use their kukris (or khukuris) as general utility tools.  This photograph, taken in Afghanistan on OP HERRICK, shows a Gurkha knife being used to carve up a watermelon.

KUKRIS (or khukuris) FOR CEREMONIAL EVENTS - a gurkha knife for every occasion!

The ceremonial kukri (or khukuri), known as the konra, is usually about twice the size of the military Gurkha knife and has a large handle to allow the user to take a double handed grip. Traditionally, the konra will be used to sacrifice a water buffalo during the Hindu festival of Dashain (or ‘Dashera’). The soldier selected to do this is under real pressure. If he decapitates the animal with a single blow of his kukri (or khukuri), then his unit will be blessed with good luck in the year ahead; if he fails to do this, then bad luck will follow. Although this practise still takes place in Nepal, it is not permitted in the UK.

Modern military Gurkha kukris (or khukuri) tend to be about 30cm in length. The blades are made of steel and have a distinctive notch near the handle known as the kaura. There are numerous interesting explanations of its presence. One of these is that it is an ingenious aiming sight for when the Gurkha knife is thrown at a target. Another is that it is to stop blood running down the kukri (or khukuri) blade and onto the handle. Yet another is that it is to catch and then neutralise an enemy blade. Whilst the latter two explanations might contain an element of truth, the reality is that the kaura is a decorative Hindu religious and phallic symbol.

The handle of the modern military Gurkha kukri (or khukuri) is usually made of dense wood. It is secured to the blade by rivets through the hilt or by flattening the end of the hilt over the bottom of the handle. On more expensive kukris (or khukuri), the handle might be made of bone, horn, ivory or even metal. The Gurkha knife's scabbard is traditionally made of wood with a leather covering. There are two small pockets at the back of the scabbard to hold a pair of small knives. One of these, the chakmak, is for sharpening the Gurkha kukri (or khukuri) and can be used with a flint to create a spark. The other, the karda, is used as a penknife for skinning animals. The tip of the scabbard is protected by a metal cap. When worn in the field, the Gurkha kukri (or khukuri) is normally covered with camouflage material and attached to the soldier’s webbing.

A soldier from the 9th Gurkhas demonstrates the use of the Gurkha kukri (or khukuri) to incapacitate an adversary as a group of senior officers approach. Although this photograph was taken in 1945, young Gurkha soldiers are still taught the same slashing action with their kukri (or khukuri) during recruit training - the Gurkha knife is as important now as it was then.

Link to the story of Gurkhas as the ultimate jungle warriors

A Rifleman of the 10th Gurkhas smiles as he tests the edge of his kukri (or khukuri). The photograph was taken in Italy in 1945.

​A Gurkha soldier on operations in Afghanistan with a ceremonial kukri (or khukuri), known as a ‘konra’. Note the two handed grip necessary to wield this huge Gurkha knife!

Link to the story of Gurkhas in the two World Wars

When in the field, the Gurkha kukri’s (or khukuri's) scabbard is usually covered in camouflage material as in this photograph taken in Afghanistan on OP HERRICK. 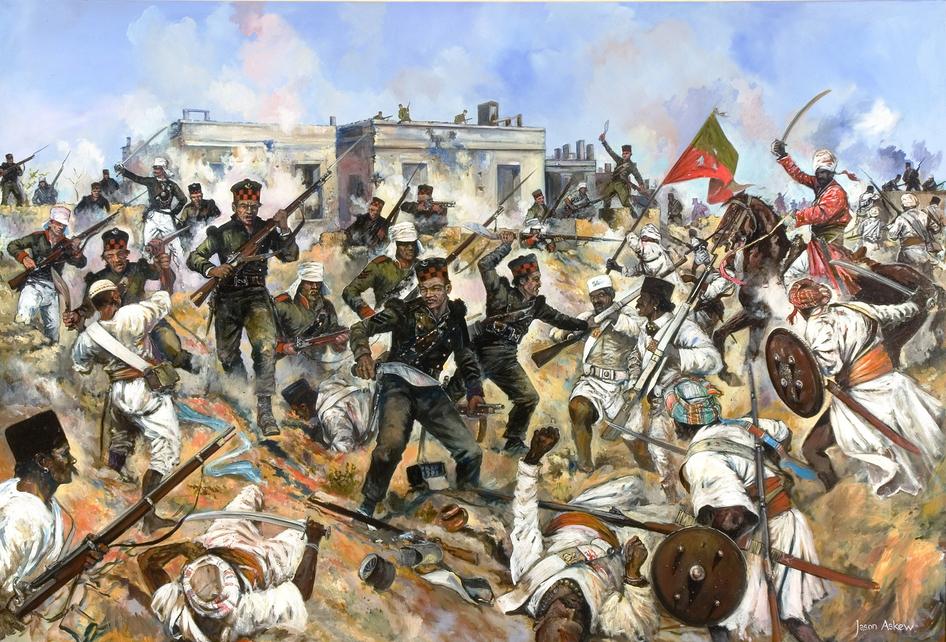 Link to the story of the Gurkha kukri (or khukuri)

There are a number of different theories about the origin of the Gurkha kukri (or khukuri). One is that it is a descendent of the machaira, the curved cavalry sword of the ancient Macedonians carried by Alexander’s horseman when he invaded north west India in the Fourth Century BC. Another not necessarily contradictory theory is that it originates from a form of knife used by the Mallas who came to power in Nepal in the Thirteenth Century. Arguably the most credible theory is that this unique Gurkha knife was developed in isolation by the peasants of Nepal. Its size and dimensions may have been shaped by the environment as a longer weapon would have been impractical given the very steep hillsides that characterise much of Nepal.

A group of Gurkhas from 3rd Gurkhas circa 1890. Note the kukris (or khukuris) being held by the two soldiers bottom right.

A soldier from The Royal Gurkha Rifles holds his kukri aloft as he storms a trench during an infantry exercise. 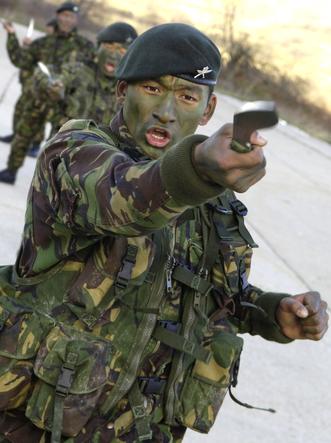 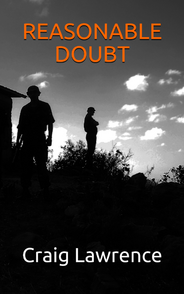 A painting by Jason Askew of the Sirmoor Battalion (later 2nd Gurkhas) defending Hindu Rao’s house against an assault by mutineers during the Indian Mutiny of 1857. The kukri (or khukuri) carried by today’s Gurkhas is little different to the Gurkha knife carried by the soldier in the centre of the painting over a hundred and sixty years ago! Then as now, the kukri (or khukuri) is a lethal weapon in the hands of a Gurkha.

​​
​When her brother is killed in a diving accident, journalist Amélie Lagarde asks ex-Gurkha Harry Parker to help her investigate. Together they get drawn into a desperate battle between an ambitious Prime Minister, the intelligence services and the world’s most wanted terrorist, leaving them with no choice but to assemble a small team of Gurkhas and take matters into their own hands.

​Click the image to the left or the link below to see the book on Amazon! 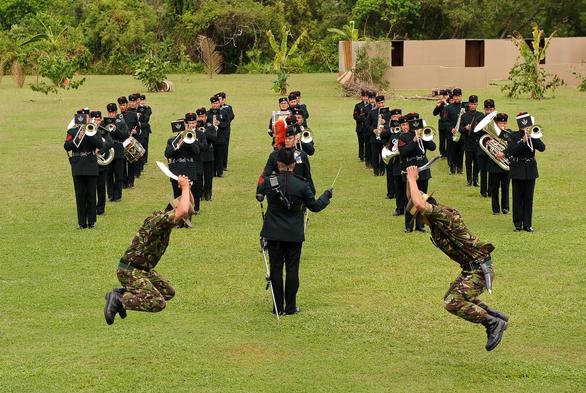 ​KUKRI (or khukuri) DESIGN - the different sorts of gurkha knife

​The Royal Gurkha Rifles (RGR), with its famous cap badge of the crossed Gurkha kukris, was formed on 1 July 1994 when the existing Gurkha regiments amalgamated to form a single Gurkha regiment of three battalions. ​Although the RGR has only existed for 25 years, it carries the traditions and history of its antecedent Gurkha regiments and has already established itself as a formidable fighting force in its own right. With a Foreword by His Royal Highness The Prince of Wales and more than 500 photographs, the book provides a visual history of this elite unit. Of note, it includes a special interest section that describes the history of the kukri (or khukuri) with lots of new images of the famous Gurkha knife. 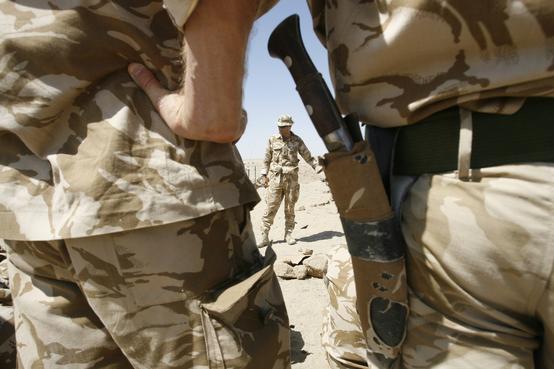 Soldiers from the Band of the Brigade of Gurkhas performing a kukri (or khukuri) display to music. 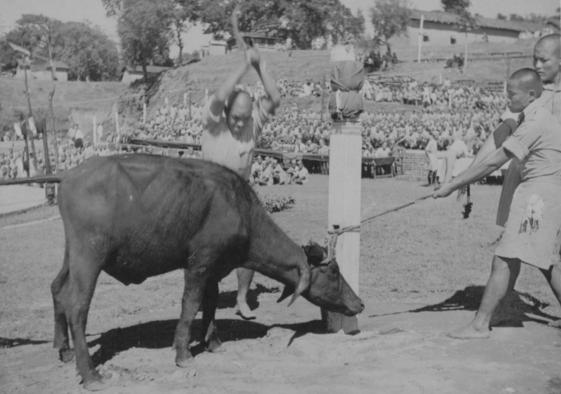 Young Nepalese men grow up using the kukri (or khukuri) as a general utility weapon in Nepal. During their basic training in the UK, they are taught how to turn this familiarity with the Gurkha knife into a lethal capability.